Yamacraw in the Sun: A rare respect

I TEND to be wary of SCAD student photographers who make Yamacraw Village their subject.

Actually, if I’m being honest, I wish they would just stop.

The public housing community behind SCAD’s Bergen Hall has too often drawn the focus of amateur photographers looking for an “edgy” place to shoot their class projects. They’ve been told by professors not to walk around the area at night and they’ve read the headlines about Yamacraw’s crime rates.

For some students – who presumably grew up very sheltered – this creates a mystique about the neighborhood that I can only describe as “gross.” 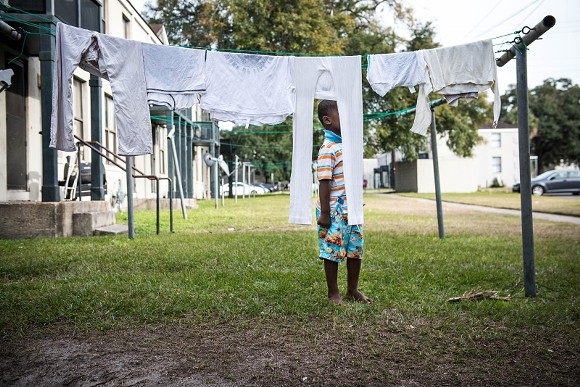 Students who walk twenty steps out the doors of their classrooms to photograph an area of historic disinvestment without any attempt to analyze their own (mostly young, white, moneyed) perspective on it deserve no credit for making photos which are at best narcissistic and at worst ethnocentric.

Most of the work that results makes me nauseous from second-hand embarrassment.

Having seen work of that type more times than I care to count, I was understandably cautious in approaching Marian Carrasquero’s Yamacraw in the Sun exhibit opening at Lee O’Neil Gallery on June 3. The preliminary images I saw suggested deeper reflection on the part of the artist – but would that first impression hold water up against the full exhibition?

I asked the artist to meet me for coffee, hoping that learning the story behind her project would relieve me of my skepticism.

To date, it is the only photo project focusing on Yamacraw Village I’ve seen that seems to treat its subjects with respect. Carrasquero, whose background is in documentary photography, has invested time and managed to create relationships with her subjects, giving us a glimpse inside their lives and homes that doesn’t feel exploitive.

The project started in January, when Carrasquero (an undergraduate photography student from Venezuela) began talking to and photographing people she met on the street in the neighborhood.

“I explained to them that I was doing a photography project and that I wanted to document their neighborhood,” she tells me.

“People were up for it. More than anything it’s about building a relationship with the people you’re photographing. You can’t fully document a community or a group of people without trying to understand them and their stories. You have to sit down and get to know them, listen to them, before throwing a camera in their faces.” 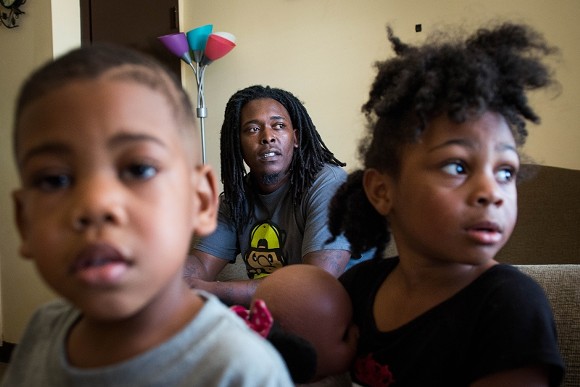 Creating the body of work that would become Yamacraw in the Sun required a tremendous amount of trust-building. It’s the kind of work that most artists who have photographed the area don’t seem to want to put in, but Carrasquero’s approach has been demonstrably different: she’s returned to Yamacraw almost every weekend since January to visit with, talk to and get to know the community.

In the process, she shot over 2,000 photos – 20 of which will be featured in the exhibition alongside a short documentary film showcasing the project.

Carrasquero created a bond with a woman named Louise, a sort of neighborhood matriarch who was born in and raised a family of her own in Yamacraw, and become close enough with a neighborhood couple that she received an invitation to their wedding.

The images in the exhibition seem to belie this bond of mutual understanding and trust that Carrasquero describes. Some images feel truly intimate, especially those shot inside the homes of her subjects.

Still, Carrasquero is undeniably an outsider. When I call her out on it, asking how (or if) she dealt with the problematic nature of her position, she tells me that she sees her outsider status as an asset.

“For them, I was like the “other”, but I’m also foreign to where I am,” Carrasquero explains, pointing to her Venezuelan roots.

“No matter what our social background is, we’re all struggling with the same basic things,” she continues.

While I would argue that things are definitely harder for some than for others, there’s a certain beauty to this idea of universality that translates into Carrasquero’s photographs. It’s what elevates them above the typical Yamacraw Village photo fare.

Instead of foisting some immature narrative onto the photos, Carrasquero is truly just documenting the everyday lives of the neighborhood’s residents.

It sounds so simple, but it’s often difficult for artists to remove themselves from the visual language of their work. With Yamacraw in the Sun, Carrasquero is offering us the chance to listen to a community that has been brutally silenced.

For decades, the community has been denied agency over their own narrative thanks to a city-wide tendency to identify the area with the crimes that have taken place there.

While Carrasquero’s presence in the neighborhood will always be that of an outsider, her work is at least honest in the sense that it documents without narcissism. Still, I can’t say I find that totally satisfying.

We should be on the look out for voices coming out of Yamacraw itself – artists who can speak from, of, and about their own community with true authenticity.

For what it’s worth, Yamacraw in the Sun appears pure in its intent. If the exhibition draws interest to the area and causes people to see vibrancy instead of blight then that’s at least one step forward on the road towards progress. 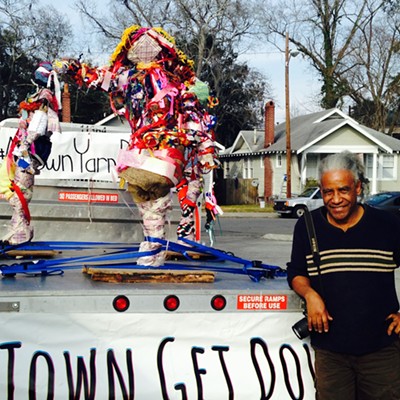