Yan Cao: The fibers of her being 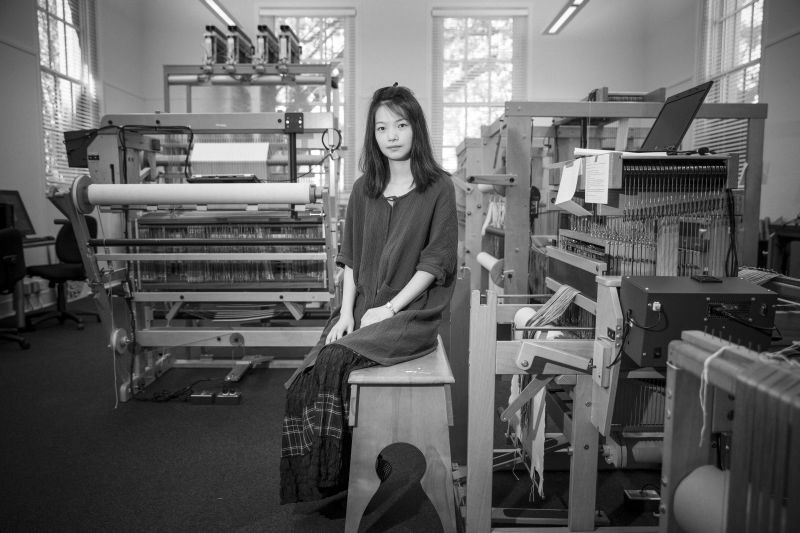 Poploquize, Cao’s first solo exhibition opening at Oglethorpe Gallery on Friday, May 13, is full of them. Glimmering circles of silver needles snaking their way through near-invisible monofilament thread; the tight spiral of a typhoon’s eye rendered in ruffled fabric and plastic bags; the sinister perfection of the storm’s funnel summoned in cotton and organza.

“I use the circle because it’s simple and important in traditional Chinese culture,” Cao tells me. “It symbolizes the beginning and the end, but it keeps going just like our own lives.”

It’s the kind of platitude I’ve heard offered by plenty of yogis and well-meaning hippies, falling from their mouths with a hollowness that belies the emptiness of their optimism.

But Cao is sincere. She talks often about the importance of patience and a peaceful mind; something she says she learned from her grandmother and which her art forces her to constantly practice.

It took Cao three weeks just to dress the loom to create “Endless”, a three-panel work made from clear monofilament threads. The piece, which features a fractured circle outlined in needles, is a testament to Cao’s dedication to her craft and an artifact of her meditative creative process.

When she works, she says, she’s looking for peace of mind.

But while pieces like “Endless” are evocative of the calmness of Cao’s meditative state, the works in her “Typhoon” series spin the circle motif out into something more insidious.

Before she came to SCAD to get her MFA in Fibers, Cao lived in Zhejiang, China with her grandmother. They lived together in an old house on the coast, an area which was frequently hit by typhoons.

“I got the idea for these pieces from a memory. In 2006, a typhoon almost destroyed my hometown,” she explains. 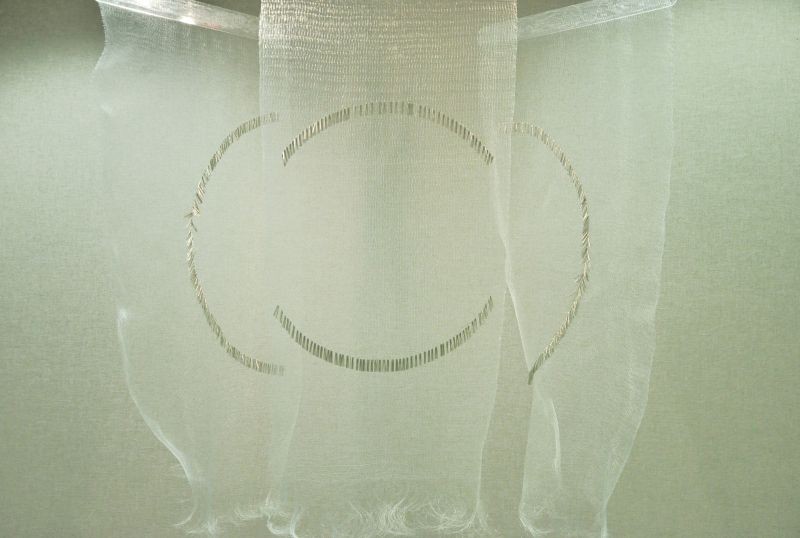 “For three days we had no water and no electricity. I was staying in my grandma’s house and I could hear the houses around us shaking. Because the house was so old, the water kept coming in. I was using a basket and a towel to keep it out; I kept doing that overnight.

After the storm, Cao says her whole neighborhood came together to clear the streets of debris. The process was very calm. These people had weathered many storms, they’d accepted the process of destruction and repair as a natural part of the life cycle of their environment.

“I think it may be because of Chinese traditional culture,” Cao says as she relays the memory to me. “Chan thinking, especially. Chan has really inspired my work. I want to translate it into my work.”

She’s referring to Chan Buddhism, a school of Mahyna Buddhism which is the spiritual parent of Japanese Zen Buddhism.

Chan emphasizes the idea of personal awakening through patience. Its followers believe that spirituality is all-encompassing, extant all around us. In the pantheon of Chan beliefs, achieving peace of mind is key to reaching spiritual fulfillment.

Cao’s artistic process is infused with this belief. As she dresses her loom and crochets her yarn she’s thinking about the ebb and flow of life, the futility of pushing against the cyclical current.

“The moon becomes round and waxes or wanes and the flowers bloom and then are gone. Like old people die and new babies come, everything is circling, repeating, repeating. That’s what I’m thinking about when I’m weaving, knitting and crocheting. Everything repeats and repeats,” she says.

There’s peace even in this moment, in the rhythm of her words. We’re sitting outside, talking and drinking coffee like we’ve each done a hundred times and will do a hundred more. Fractals of sunlight flit across her white blouse, casual reminders of the day slipping by.

Though Cao’s fibers may have the appearance of sieves, they actually function to capture memories–the moments before and after peace of mind is achieved. For the artist, her fabrics are a living diary.

“I collect fabric from my friends because it reminds me of people and experiences. I put it into my work to record my life. It’s like fixing my memory, fixing my experience,” she says.

Maybe viewers sense these silent stories in Cao’s work. Often, people will come up to her and tell her what memories the pieces have stirred up in their minds.

“[Typhoon] reminds people of lots of different beautiful memories that they share with me,” she explains.

“They share their memory and become a part of my memory. It’s like our lives have crossed. That’s the most beautiful thing in our world, I believe.”