Year in Review: Savannah and the movies 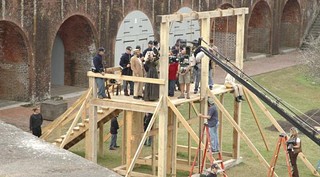 Hollywood returned to Savannah in 2009, after a decade–long sabbatical. Other states offered substantial tax incentives for film production companies, making it far more lucrative to shoot there than in Georgia. But when Governor Sonny Perdue changed Peach State policy in 2009, he effectively rolled out the red carpet for moviemakers.

Make that the green carpet. Georgia now gives tax credits for up to 30 percent of production and post–production expenditures – and in Hollywood, money doesn’t just talk, it has all the best lines in the script.

The first studio to take advantage of the new deal was Disney, which had been planning to shoot The Last Song, starring its latest teen sensation, Miley Cyrus, in North Carolina (that’s where the source material, Nicholas Sparks’ novel, is set). But Georgia’s money smelled sweeter.

The Last Song touched down on Tybee Island in June, and for a while there, Miley–mania was in full bloom. Crowds gathered, in the thousands, around the set on Tybee Beach, every appearance by the star punctuated by shouts and screams from the assembled (there were lots of pre–teen girls, to be sure, but a healthy amount of star–struck adults, too). When she was filmed smooching in the surf with co–star Liam Hemsworth, Tybee made the front page of the National Enquirer.

Every Cyrus sighting made local – and sometimes national – news. Whenever she ventured out in Savannah, crowds formed. It got so ridiculous that her Last Song co–stars – Greg Kinnear and Kelly Preston – were barely noticed as they made their way around town.

Originally scheduled for a January release, The Last Song was pushed back to Easter – perhaps to steer clear of the Feb. 6 release of Dear John, another movie based on a Nicholas Sparks novel.

However good or bad the movie turns out to be, Cyrus’ time in Savannah did produce a chart–topping record. The actress–cum–singer cut “Party in the U.S.A,” and the rest of her Time of Our Lives album, at local producer Phil Hadaway’s 3180 Media Group studio.

Because Cyrus was contractually bound to remain in the area while filming The Last Song, Disney – also her record company – needed to find a local studio (the record had to be released by Aug. 31 to accompany a Miley Cyrus clothing line roll–out at Wal–Mart).

“She knows what she wants to hear in her headphones, she knows what key is best for her to sing in,” Hadaway told us in August. “And she’s a good guitar player. We’d sit around between session times and just play guitar and sing. She’s a great girl. I had so much fun working on the sessions. I wasn’t expecting that.”

In October, Robert Redford arrived, film company in tow, to direct The Conspirator, an historical drama set in the aftermath of the assassination of Abraham Lincoln.

This was Redford’s second time behind the camera in Savannah; he’d directed the poorly–received golf drama The Legend of Bagger Vance, starring Will Smith, Matt Damon and Charlize Theron, here in 1999.

The Conspirator, which shot (under a cloak of secrecy) all over Savannah until the second week of December, used the city as a stand–in for 19th Century Washington, D.C.

Booth, of course, was captured and killed a few days after the assassination, but Surratt was among those tried for conspiracy. She was hanged on July 7, 1865 along with three other Booth accomplices.

In 1979, Dennis Weaver trod virtually the same path in Savannah for a TV movie called The Ordeal of Dr. Mudd. It’s not a bad film – you can find it on DVD – and it also featured the Hostess City all duded up as Lincoln–era Washington.

Dr. Samuel Mudd was an acquaintance of Booth’s, and he was charged with conspiracy after setting the actor’s broken leg a few hours after the assassination (Booth had injured himself jumping top the stage from Lincoln's private box at Ford’s Theatre, after he’d shot the president).

The government, however, could not prove that Mudd was involved in the actual crime, so he didn’t hang – rather, he was sent to the penal colony on Dry Tortugas, Florida. After four years, he was pardoned by President Andrew Johnson.

A release date for The Conspirator has not been announced, but since it just wrapped production a few weeks ago, it’s too early to expect such news.

However, like The Last Song, the Redford film utilized hundreds of local people as extras and stand–ins, as you’ll see from J.R. Roseberry’s account, also on this Web site.

The economic benefits for the city are sure to be high. “We’re running our numbers right now,” says Jay Self, Savannah’s Director of Film Services office. “I think it’s safe to say that the economic inpact, for each one of these films, will be in the neighborhood of $10 million.”

Told ya. The best lines in the script.