We asked stars and crew of local theatre: What’s your fondest memory of 2015?

“THE STANDOUT for me was not only being able to play the lead Dr. Vivian Bearing in the Pulitzer Prize-winning play W;t, but even topping that was to have the playwright Margaret Edson come into town at the invitation of The Collective Face Theatre Ensemble to give a talk on the play, then to see our production of the play and answer questions for the audience and the cast afterwards. Imagine! A Pulitzer Prize-winning playwright in Savannah especially for The Collective Face Theatre Ensemble. I still am savoring her kindness, her intelligence, and, dare I say it...her wit.” 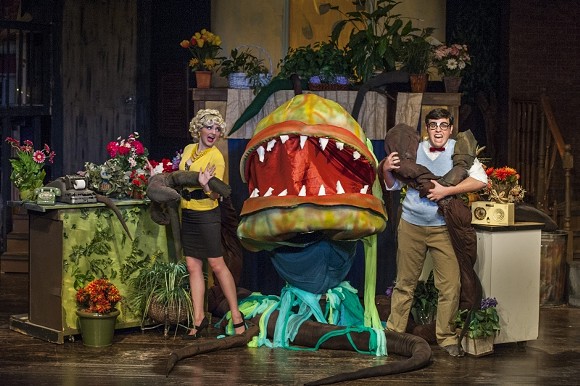 “THE CAR from Chitty Chitty Bang Bang was a real triumph for us! It was so highly anticipated and when it finally arrived, the show got a little more magical.

Our Junior Company’s production of Little Shop of Horrors was such a highlight of the season for so many reasons; the cast was so talented, the puppetry work by David Poole was amazing. That was a special one.

Our summer camps this year were amazing! Such a talented group of students...Peter Panic, 101 Dalmatians, The Big Bad Musical, Seussical Junior, Fiddler on the Roof Jr. and Thoroughly Modern Millie.

Elephant & Piggie’s “We Are in a Play!” was definitely one of the funniest, sweetest shows and casts we have ever had the pleasure to work with.

And finishing out the year, A Charlie Brown Christmas has been a real treat to watch come together. Definitely a great way to ring in the holidays.”

“THE THING that sticks out in my mind the most is, of course, the Encore in the Park. Bringing free Shakespeare to Forsyth changed my life. Getting to watch almost 400 people experience live theatre, right there in the middle of the park, no strings attached, was a game changer.”


“I STARTED off this year with a production of Chitty Chitty Bang Bang at the Savannah Children’s Theatre where I played several roles, including Mr. Coggins. I remember particularly the car that was rented for the production and how exciting it was to see a replica of the movies famous car!

My next memorable show was a production of the play The Wizard of Oz for the Richmond Hill Community Theatre. I was cast as the Scarecrow and put in a lot of work into that production as it was my first lead role. It was so much fun getting to work on it and very physically demanding as I was required to fall often.

The next memorable show I did was The Kiss of the Spiderwoman, my first show with the Collective Face Theatre Ensemble. I was cast as a prisoner and Aurelio, the best friend of the man character. I really enjoyed this production. It was dark and dramatic, and it challenged me as an actor to always be in that head space and acting while on stage. I also had my first solo singing lines in this show, which was amazing to do. I was asked shortly after the production to be a member of The Collective Face Theatre Ensemble and gladly accepted.

My last memorable moment has been doing my current production in The Underpants with The Collective Face. I was not originally cast in the show but lucked out with an opening that became available. I have loved every minute of this show! It is so funny and it is such a talented group of people that I have the privilege of being on stage with every night! I have loved portraying Benjamin Cohen, the sickly, asthmatic, hypochondriac in the show. I connect to the character in a way I haven’t with any other character before and am truly honored to have had this experience!”


“OUR SOLD-OUT improv season. Not a seat left in the house all year. So many laughs. So much beer.

Every time the Pay What You Can policy was used. It’s one more person getting to experience live, professional theatre at a price that they’re comfortable. Knowing that money isn’t going to stand in the way of someone getting to engage in art.”