Two centuries ago, plague and politics paralyzed the city

Jonathan M. Bryant is a Professor of History at Georgia Southern University.

ALBERT CAMUS’S novel, The Plague, opens with Dr. Bernard Rieux leaving his surgery and stepping on a dead rat. Rieux kicked the rat aside without a thought, but a moment later felt uneasy.

What was a dead rat doing on the landing outside his office? On June 26, 1820, Dr. William Waring of Savannah Georgia probably had a similar feeling. He examined a patient who had an unusual illness. The man was sick with fever.

Rather than the usual surge and decline in fever found among malaria patients, this man had an unremitting high fever. Three days later the patient died.

Dr. Warring could have simply ignored his unease, but he didn’t. Instead, he continued to visit the same poverty-stricken district near the Old Fort of Savannah, looking for similar cases.

Two weeks later he found one. Another resident of Washington Ward “was attacked with Continuous fever . . . and died on the fourth day with haemorrhages (sic) from the nose and bowels.”

Soon another man, Patrick Stanton was seized by fever. He died on July 16, after exhibiting “el vomito negro,” the black vomit characteristic of hemorrhagic fever. For Warring the conclusion was clear; Yellow Fever had come to Savannah.

While these events took place 200 years ago this summer, the conflicts that developed may seem all too familiar. The warnings spread by Dr. Warring and a colleague, Dr. William Daniell, fell afoul of the political powers in Savannah. Politicians denied the severity of the outbreak.

At least three local newspapers published contradictory information that descended into insults. Confused citizens did not know what actions to take as people around them began to die.

As Dr. Warring and Dr. Daniell spread word of the deadly contagion, such word was not welcomed by the City leadership.

In 1820, the only known protection against Yellow Fever was to flee the infected city. Such a panicked exodus, however, would cause commercial disaster; businesses would die, homes would be abandoned, ships would be quarantined.

Politicians and business leaders pushed back against any suggestion of Yellow Fever in Savannah.

On July 18, 1820, in response to the “rumours,” the Georgian newspaper printed a report of deaths recorded in June. Of 30 deaths in June among white Savannahians, only 14 were due to fever. This was not an unusual number, as the newspaper pointedly noted. The numbers used, however, were almost three weeks out of date.

Warring and Daniell continued to report cases of Yellow Fever, and rumors continued to spread. These reports were ridiculed by Savannah’s political leadership and in the newspapers. Finally, on August 11, the city government asked four distinguished physicians to investigate and put an end to reports of malignant sickness in the eastern portions of the city. 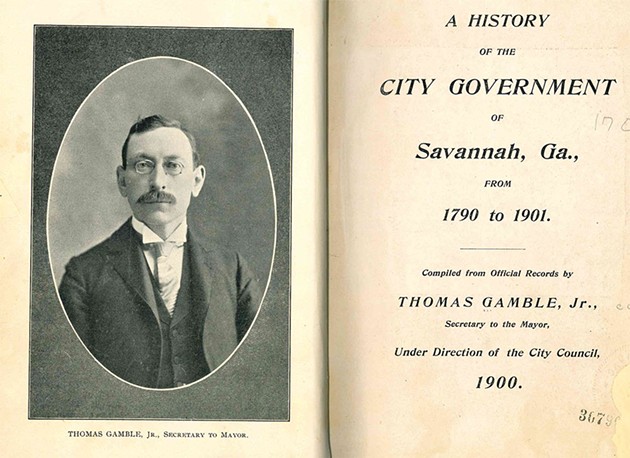 Courtesy City of Savannah
Frontispiece of Thomas Gamble's 'A History of the City Government of Savannah, Ga.'

The doctors toured the slum district and found large numbers of poor whites living in crowded conditions amid streets piled high with trash and rubbish. There was sickness, but the doctors reported that it was due to the “want and dissipation” of the inhabitants themselves. In the report released by Savannah City Council and printed in newspapers the doctors concluded they had found nothing alarming.

Someone, however, leaked the actual report of the doctors to the Savannah Gazette. Publishing excerpts from the report on Aug. 15, the Gazette criticized the City Council for hiding the truth and announced that based on the report there was Yellow Fever in Savannah.

The Savannah Republican responded the next day, condemning the Gazette and suggesting the newspaper was like “an ignorant fellow” screaming “mad dog! In the street.” Reports of sickness were greatly exaggerated, and no person of good habits should be afraid.

The Mayor of Savannah also responded immediately, having a notice published in all of Savannah’s newspapers. “I feel myself authorized,” Mayor Thomas U. P. Charlton wrote, “to announce that no pestilence prevails in this city.”

The sickness was under control and was confined to “strangers and people of intemperate and dissolute habits.” This announcement was printed regularly in the newspapers for weeks.

As the bickering about sickness continued in the newspapers, letter writers launched attacks condemning the doctors who reported sickness. Other port city newspapers reprinted these denials.

In September, 232 were buried. These numbers did not include African Americans, or those buried in other locations.

Finally, even the city leadership could not continue to deny the Yellow Fever epidemic. On Sept. 12, the Republican finally reported there were cases of “dangerous fever” in the city, some of which involved the black vomit. 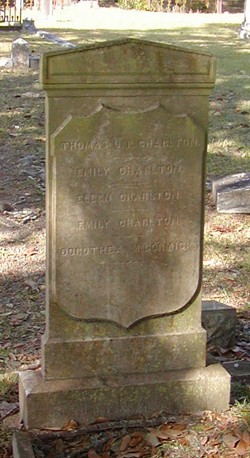 On Sept. 14, after almost two months of denials, Mayor Charlton retracted his statement that there was no pestilence and confessed there was a “malignancy” in Savannah. On Sept. 19, the City Health Committee finally admitted there was Yellow Fever in Savannah.

Over the previous three and a half weeks, they revealed, at least 202 whites had died of it. Within a week, just as Savannah’s leaders had feared, lurid reports of the Yellow Fever spread across newspapers nationally.

As one Savannah businessman reported, “No business is doing in consequence.”

Niles’ Weekly Register was the closest thing there was to a national news magazine in 1820. In mid-October, Hezekiah Niles reported that more than 6,000 people had fled Savannah, and only 1,400 whites remained in the city.

Despite this exodus, more than 200 white people died of Yellow Fever in October. Three of the four doctors who had been asked by the City to investigate the situation in August died. Even Mayor Charlton’s wife Emily died. His denials of Fever through July, August, and September must have haunted him.

No one counted deaths among Savannah’s black population. However, there was one group who was being counted.

In July, soon after the Yellow Fever began, 258 captives from an illegal slave vessel named the Antelope had arrived in Savannah. At first they had been confined at the race track, but then in August were moved into homes throughout Savannah.

By the end of the epidemic in December, 46 of these captives had died, or a death rate of 18 percent. In December of 1820 Henry P. Russell began to market an “Official Register” by name of Yellow Fever deaths in Savannah.

He listed 695 white victims by name and confessed he had no names for the black victims, but estimated there were at least 200. This was probably a dramatic under-estimate.

The 1820 census counted 3,657 enslaved and free African Americans living in Savannah. The white population was placed at 3,866.

If 695 whites died, as counted in Russell’s register, that is almost exactly 18 percent of the white population, congruent with the percentage of Antelope captives who died. The same rate applied to the census count of blacks in Savannah would be 658 deaths, not 200.

Physicians who investigated the epidemic afterward estimated a death rate of twenty percent. In other words, there is a strong argument that the mortality from Yellow Fever in Savannah was substantially greater than the usually published figure of 700. It was likely to have been twice that number, or at least 1,400 dead.

No one wanted to know the true number of dead. In a city whose population probably varied between 9,000 and 5,000 people depending on the season, publishing the true number would have been devastating both politically and economically.

Hit by the national economic panic of 1819 and the great fire of January 1820, the Yellow Fever epidemic was a blow to a city already staggering. The 1830 census showed that even a decade later Savannah had a smaller population than in 1820.

Other than efforts to pay planters to keep fields dry near the city, little changed in Savannah’s preparedness for Yellow Fever. Cases of Yellow Fever cropped up regularly in Savannah, and additional mass epidemics struck in 1854 and 1876.

Throughout the nineteenth century Yellow Fever proved an unsolvable problem for the city of Savannah.