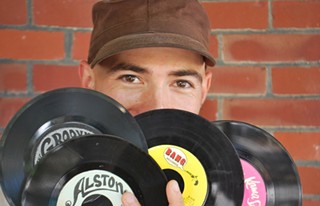 Early in 2012, Jose Ray began volunteering for the guys who put on the monthly Vinyl Appreciation events at Muse Arts Warehouse. For a while, the insanely talented visual artist just designed a series of eye-catching posters ... but soon enough, he heard the seductive siren song of the turntables. And succumbed.

Vinyl Appreciation recently celebrated its three-year anniversary. And Jose Ray is now one of the loose-limbed organization's veteran platter-spinners. "With my first experience getting on the two turntables and mixer, everyone was so nice, making sure you feel as comfortable as you can getting up there behind all that crazy equipment," he says. (He now owns his own gear.)

Let's make it plain: VA is an Open Mic Night for DJs. "It's always been an open format," Ray explains. "Everyone gets 20 minutes to play whatever they want." And by everyone, he means everyone. Come in and play your records, and whoever's there will listen, and doubtless dig it.

There is no restriction of genre; the only rule is that whatever gets played has to be on vinyl.

"I always say it's what Pandora wishes it could offer people," Ray says. "The range of music you hear in there is so incredible. Someone will get up there with his genre, the next guy'll be a super hip hop DJ, scratching, switching songs after 30 seconds. Then you get another guy who's into like '60s and '70s prog rock. Then the next guy has all this foreign march band stuff. It just goes so far."

The August VA happens this week, on Sunday the 25th from 5 to 10 p.m. Foxy Loxy will provides treats and coffee, Graveyard Records will have used vinyl for your browsing pleasure. Admission is free.

The "usual suspects" (i.e., the regular VA players) are a combination of club DJs, vinyl collectors and "crate-diggers," music fans who get off on digging through boxes of thrift-store junk, in search of hidden vinyl treasures. Then they drag their own crates to the gig.

The Muse event is the "mothership," but Vinyl Appreciation is represented in the Foxy Loxy courtyard (the second Thursday of each month) and at the Sparetime most Mondays. Ray and company consider these events "spinoffs" (as it were), to draw attention to the big nights at Muse.

Spinning at Foxy and Sparetime is by invitation only.

Ray, who says that playing digital music just can't hold a candle to the tactile pleasure of vinyl, has recently begun taking independent DJ gigs. He'll be at the Sparetime this Saturday (Aug. 24).

Like all artists, he's evolving, and letting his talents take him where they will. Back home in Kansas, he switched between drawing, painting and designing, and playing in a punk rock band. Then he came to SCAD.

Most people in Savannah know him through his visual art, but music has always been there on his palette, too. "I think that's why I do a lot of collaborative and live event things," Ray says. "Because I do miss live performance, and the collaboration that you get with music."

If you missed last weekend's sold-out performance from the Boxcars at Randy Wood's Pickin' Parlor, here's some good news. The all-star bluegrass band's show was streamed lived at randywoodguitars.com ... and the entire performance video has been archived, so you can watch it any time your heart desires. For free.

And check this out: Months of great acoustic shows have been professionally shot at Randy's, and are now archived on the site — including Ronny Cox, Gonzalo Bergera, Claire Lynch, Town Mountain and the Little Roy & Lizzy Show. Look for the box that says "Flatt Mountain Records" on Randy's home page, and follow the prompts.

It's part of a partnership between Randy Wood Guitars and Saltymoss LLC, a new media company specializing in live streaming.

Hey bands, you might want to look into what they do, at saltymoss.com.

One more note from the Randy Wood files: The legendary folk artist David Bromberg will perform in the Pickin' Parlor Dec. 14.

• According to Pollstar.com, the all-business concert-booking website, Collective Soul has been booked to play Richmond Hill's Great Ogeechee Seafood Festival Oct. 19. So far, the fest folks haven't made an official announcement ... but Pollstar's usually right on the money, so expect it soon.

• A new one on the Savannah Civic Center site: The Band Perry plays the Johnny Mercer Theater March 7, 2014. Gee, we'll uh ... see you there. I guess.