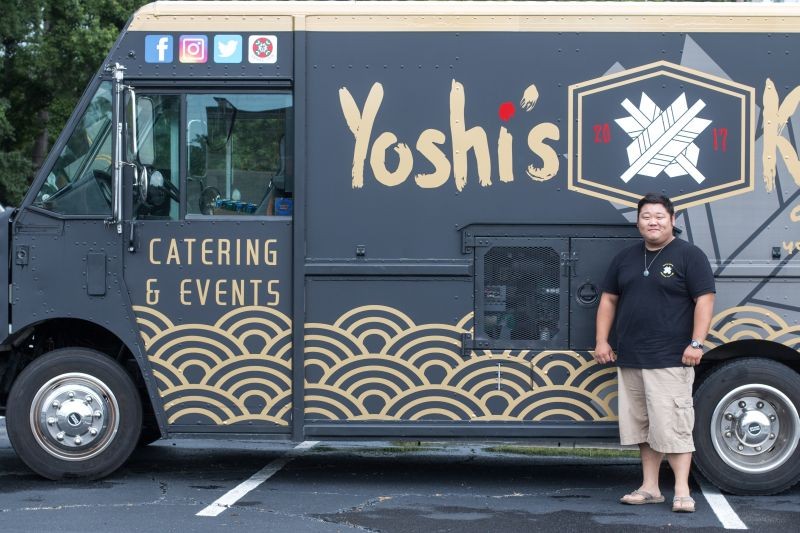 TJ with his truck!

THERE'S a new kid on the block, but the restaurant behind it, Sushi Zen, is anything but new to Savannah locals.

This Savannah staple that locals have loved for years is now part of the city's recent food truck scene. The man behind new food truck Yoshi's Kitchen is Chef Takami Yoshimoto, son of Sushi Zen's owner.

He also goes by TJ. As for the name of the truck, TJ wanted to honor his father and family by naming it after him: Yoshi.

TJ's career started with culinary school in Austin, Texas, followed by an externship at famous Chef Morimoto's restaurant in Disney Springs, Florida. However, "He had to come back home to help with the family, and that's around the same time they found a truck," TJ tells me as he details this culinary adventure.

After falling in love with food trucks in Austin, TJ was excited when Savannah opened up for food truck entrepreneurs. What he really wants is "for Savannah to see the potential in food trucks because they can bring a community together." 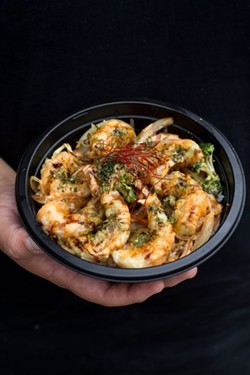 I tried the Donburi Fried Shrimp Rice Bowl, the most popular bowl. After devouring it, I understood why.

Most Savannahians love shrimp, especially if they are fried. The coastal shrimp featured in this bowl are not just any old fried crustaceans, but are encased in a light and airy tempura batter. The bowl is layered with tender steamed white rice, lightly caramelized onions, crunchy carrots, roasted broccoli, and a sprinkling of vibrant saffron.

To finish the bowl TJ drizzles teriyaki sauce and shrimp sauce, the two sauces that are probably every Savannahian's favorite addition to an Asian dish. The meal has a bit of everything with each item working in harmony with the last.

Other options for the bowl include steak, slow braised pork belly, and — the option I will be going back to try — Japanese fried chicken. I have encountered Korean fried chicken but never Japanese.

When I ask TJ what Japanese fried chicken means, he explains, "it is called the karaage fried chicken..we basically velvetize the chicken by marinating in egg whites, saki, ginger, and garlic to make it tender...the frying process is just flour and cornstarch."

As for the sauce, because Southerners love a good sauce to go with their fried chicken, it is covered in teriyaki. Japanese fried chicken "is kind of our bar food...you would get that at a bar with a side of beer," TJ elaborates.

The coolest part: Yoshi's is the only place in Savannah you can get the extremely unique and out of this world fried chicken.

The steak option is prepared in the style of yakiniku beef, which means Japanese style grilled beef. It is tender sweet and smokey and served with a slathering of delicious sauce. This bowl is perfect for those customers that want something that taste familiar but with a flavorful twist.

As for the pork belly, it is TJ's personal favorite because it takes him "eight hours to braise it with a lot of love and sweat."

To braise the pork, TJ uses their house sauce, an amped up sauce with a teriyaki base. TJ let me in on the coolest part about his teriyaki base: 'We continue to use the same base...we bring [extra base] up to 165 degrees Fahrenheit to kill of any bacteria, and then we use it for the next batch."

He explains that the technique of never starting from scratch with a sauce is a one that is often used in Japan. This seems to be the Japanese equivalent of saving the pickle juice from the last jar here in the South.

Slightly on the more traditional side are the pork potstickers. As for the flavor, it is anything but traditional. The shell is pan fried every single side, unlike many potstickers that can often be chewy due to searing on one portion of the wrapper.

Texturally, the crunch is through and through until your tongue hits the succulent pork filling. As you eat each flavor packed wanton, the first taste that hits your tongue is fresh ginger, followed by salty, juicy pork. The sauce for this dish is classic soy and scallion dipping sauce that is commonly paired with potstickers.

If you are not too full, order the Tempura Cheesecake for dessert, which could only be described as a play on textures and sensations. TJ takes a slice of cheesecake, batters it in tempura, fries it, smothers it in a matcha chocolate sauce, and plops on fresh whipped cream. Encasing the creamy silky traditional vanilla cheesecake is an delicate and airy coating of tempura.

As you cut into the slice, the cream cheese oozes out of the casing and as it hits your tongue it feels like you are eating a cloud. Somehow TJ elevates fried cheesecake (what you would imagine to be a heavy dessert) to a level of brightness that I would have never thought possible.

I could spend the rest of this article discussing the options at Yoshi's, because the menu is not limited to only a few, select things. TJ has changed the menu "up to three times per week."

The idea behind the food truck is the ability to feature different options. Recently the menu has even included tacos jammed with oysters, crab, or shrimp. TJ even hopes to bring sushi to Savannah via his mobile meal wheels.

When Yoshi's is not servicing events or popping around town you can find the truck stationed at Daffin Park, "starting July 1, through the year," TJ tells me, because Yoshi's Kitchen was of the lucky trucks to gain a consistent spot to park through Savannah's food truck lottery. cs