Social theory and whiskey shots at the Sparetime 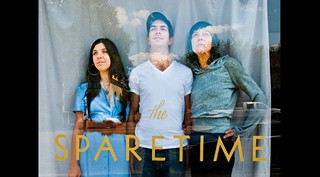 Mention Cafe Metropole to longtime local foodies and you’re bound to get a lot of wistful sighs.

The notoriously quirky restaurant once operated out of the funky former Greyhound bus station on MLK Jr. Boulevard., back when that side of town was still too sketchy for mainstream diners.

It earned a loyal following for Franco–Mediterrean–style food and fresh–baked bread among the arty and adventurous, who appreciated having their own spot to convene.

“It was the first place of its kind in Savannah,” lamented one longtime customer, who remembers an early Nokia stabbed to the wall with a knife as a caveat to patrons unfamiliar with proper cell phone etiquette. “Before Metropole there was nothing countercultural or alternative here.”

Married owners Clara Fishel and Tom Stephenson served an adoring company of artists, musicians, food snobs and weirdos from 1997-2002, when the 100-year–old building literally crumbled around them and they were forced to close.
“I love the fact that people have such fond memories of the place,” says Fishel. “Now it’s 10 years later, and Savannah’s different. We’re all grown–ups now.”

No doubt, the neighborhood has changed. Tourists and students traipse up and down the boulevard past new restaurants, art supply shops and the swanky new SCAD museum.

(The ramshackle bus depot is still boarded up, its façade currently adorned with SeeSAW’s Before I Die public art project.)

Some of the old Metropole crowd have moved on, but those who’ve stayed in town are overjoyed at the opening of The Sparetime, Fishel’s new venture down the road.

Though it’s seen a dizzying rotation of occupants in the last decade, the corner building of MLK and Congress is another iconic spot, with floor–to–ceiling windows and cavernous upstairs spaces (more on those later.)

Uncluttered with simple lines, blond wood and a horseshoe–shaped bar, The Sparetime celebrates a certain adult elegance (no neon beer signs, thankyouverymuch) combined with a mischievous poke at highbrow pretension (classic rock LPs on the record player, for instance, and a lime–in–the–coconut cocktail named after crooner Harry Nilsson.)

Its presence locks in the block as a glittering nightlife nexus, with Lulu’s Chocolate Bar and Rogue Water down one vector from the front door, and Congress Street Social Club, Murphy’s Law and The Rail Pub along the other.

A similar cadre of local artists, musicians and activists is already congregating evenings in the deep black booths, and the laidback atmosphere has attracted a new crowd of regulars. While the Sparetime is more bar and less restaurant than Cafe Metropole, the proprietor’s aim is to reconstitute the sense of belonging and kinship that made the latter so beloved.

That’s not just some hipster shibboleth thrown out for street cred; it’s a well–researched promise. After Metropole closed in September 2002, Fishel and Stephenson moved to California for several years, where she earned a degree in Community and Regional Development from UC Davis. She studied the work of urban sociologist Ray Oldenberg, who champions the significance that informal gathering spots like bars, coffeeshops and parks play in a thriving society.

In his book The Great Good Place, Oldenburg coined the term “third place,” wherever it is we go to find conversation and companionship outside of the first and second zones of home and work.

Fishel consciously kept in mind Oldenburg’s defining characteristics of a successful third place as she and her collaborators developed their concept, working in a sense of playfulness and warmth while “staying true to ourselves and the kind of place we’d want to hang out in.”

Adds Fishel, “I definitely feel like I’m using my degree.”

Though husband Tom is taking a lesser role in this enterprise to be around for the couple’s two boys, the Sparetime remains a family affair. To manage the front of the house, Fishel brought on her sister, Jane Fishel, who’s shaken martinis from San Francisco to Brooklyn. Jane’s beau, Andrew Walker, mans the kitchen, from which a tasty selection of tapas and gourmet pizzas come forth.

Together they spent months choosing house spirits and discussing all the things necessary to make “a place where people from all walks of life can feel welcome and be at home.”

That democratic ideology is reflected in the Sparetime’s cocktail menu, curated as carefully as a gallery opening. Some will delight in the small but refined wine list and selection of small–batch artisan liquors; others will find happy refuge in “The Po’Boyfriend” house special, a one–two punch of an Old Milwaukee tallboy and a shot of Old Grand–dad whiskey for five bucks.

Purists value that the cuba libres are made with real Mexican Coke, and there’s much to keep the curious palate occupied. (None of that ubiquitous vodka and Red Bull here.)

But there’s more to building community than tossing back a few drinks. Fishel and Stephenson’s long involvement in Savannah’s art scene is evident on the walls, where Ikeda Lowe’s delicate decoupage and Adolfo Hernandez’s freestyle Arabic script echo the couple’s experimental “art in residence” installation last year, when they offered up their home to be reimagined by local painters.

The music has followed as well: In barely two months, the wide–open second floor space has become the de facto hotspot for private parties, hosting Savannah Stopover Festival VIP shows, a benefit for local Ryan Nelson and the SUAF afterparty.

The lease includes the third floor, too, and Fishel has divided it into studio spaces for local artists Todd Schroeder, Mary Hartman and Liz Sargent. Future happenings might include guerilla theater and underground bands.

“We’re about being open to ideas and experiences,” says Fishel. “I’m happy to be able to provide a space to do all kinds of things.”

Now that Savannah has bred something of a healthy counterculture, and “third place” alternatives to weak beer and chicken fingers abound, cultivating a hangout for the creative community may not seem quite as revolutionary as in the late 90s. Still, between its eclectic patronage and daily homage to vintage vinyl, the Sparetime seems to retain that old Metropole attitude for embracing the edge.