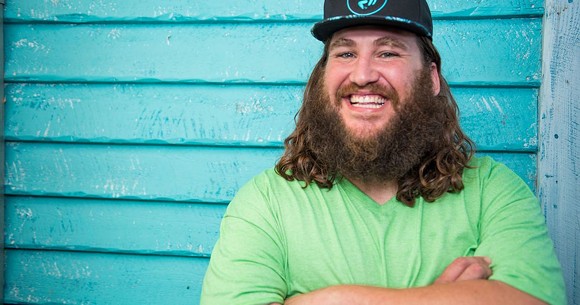 SAVANNAH's hometown hero is back!

Okay, so Zach Deputy may claim Savannah, Bluffton, and Hilton Head—he was born in Savannah, currently lives out toward Pooler, grew up in Bluffton and the Hilton Head area—but that’s alright by us. The multi-instrumentalist and songwriter has been putting the Lowcountry on the map for years with his funky, loop pedal-driven, reggae-infused melodies.

Deputy’s one-of-a-kind sound is deeply influenced by his diverse heritage. His family is from St. Croix, and Deputy clung to the calypso tapes his grandmother gave him as a child and cherished the music of his Puerto Rican, Cruzan, and Irish heritage. He calls his own music “island-infused drum n’ bass gospel ninja soul”—there couldn’t be a more apt description.

A festival favorite, Deputy’s affable nature and sunshiny tunes light up a room and inspire crowds to dance and sing along. He’ll perform at Southbound this weekend for an evening of music, beer, and souvenir pint glasses.

We caught up with Deputy about his latest album, Wash It in the Water, cutting his teeth in the Savannah scene, and keeping wary during stalker season.

Wash It in the Water came out in September. How do you feel about it now that it's been in the public eye for a little while?

I'm kind of a set-it-and-forget-it guy. Soon as I make a piece of art, I've already begun thinking of other pieces of art. I'd like to go back and get slapped in the face by it again. It's fun to do, to forget and come back. I still love it, though.

How did the songs come together for this album?

That album just happened organically. I recorded over a couple days in Bluffton and I drew some old songs I recorded back in 2013 at my house and kind of like, here's another piece of art. And it kind of works. It's more of a hip-hop album, definitely different, but I feel like all the music works good together.

How did you start playing live?

I started playing music out professionally when I was 16. I won a competition in high school jazz band and got a couple of these really corny concerts. People saw me there and wanted me to join bands. I started to join bands and grew weary of doing other people's music and other music in general. I wanted to do my own thing, so I started looping on the side and the looping thing took off.

Do you remember the first show you played with the loop station?

It was at the Mellow Mushroom in Savannah downtown. Then they eventually fired me! I'm still trying to figure out new ideas with it. It's this big gamble, weird business. You're going to but this piece of gear—it might make it cooler, it's an investment. I'm always playing my butt off to try to make another gamble of what to buy and what to play with. 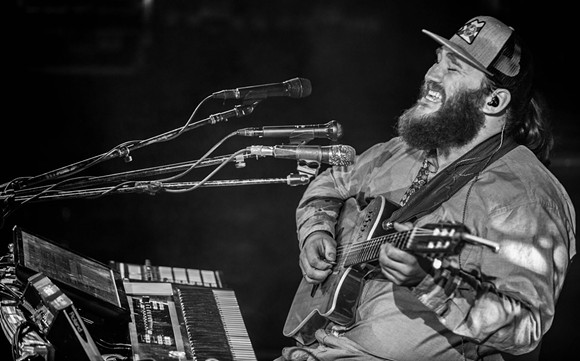 Were there local musicians who inspired you when you were young?

Totally! There were so many great musicians when I was young in the Hilton Head and Savannah area. I remember the first time I played in a bar onstage with Eric Moore. He's the man! I got to hang out with him when I was a little kid. Those guys were all nice, all the older people took me under their wing and were very nice to me, very encouraging. It really helps to grow up with such great players to inspire you and egg you on.

Gotta ask: your song about an encounter with a stalker, "Edna," from the new album. True story?

Do you have a stalker problem?

It comes in waves. This is what's going on these couple months, then it's peaceful again. Then it gets weird. When it's colder outside it's not as bad. People don't like being cold! But when the weather's nice, the crazies are out. Just an observation: around springtime is when stalkers are in full season.

There's a good amount of rapping on the new album. What was it like exploring that?

I mean, my first album I never released was pretty much all hip-hop. So for me, I was just reliving, and anybody who's seen me live knows I love hip-hop. I do hip-hop, but I don't identify with rap culture. Most of my albums haven't had rap on it musically. For me, it's just doing things that I love. It throws some people for a loop, especially more of the record fans and the live fans.

What's the difference in Live Show You and Album You?

The live show is me trying to entertain myself. The studio recording, I'm literally working on the medium. It's two completely different mediums. I'm thus far been better at live performance because it's all heart and soul live. That's the thing that transposes through it all. And the studio stuff, well, the way it's best is if you have more money! [Laughs.] if you have enough money, you can sing inaudibly and people can make you sound like whatever you want. I think live performance is always my favorite medium: you can fake it like Britney Spears does and lip sync, but if you're really singing, you can't fake it in a live setting.

You've been touring relentlessly. Do you ever get burnt out?

I have my days where I say, 'I'm done! No more!' But for the most part, I love it. I just gotta work really hard to keep improving the living conditions so you always stay excited about continuing on tour. There's a lot bigger difference between now and five years ago. I couldn't live the way I did, touring and sleeping on couches and in the back of the van. I need a bed and a hotel every night. I gotta have sleep! The trick is for gain and success to be equal or more than your age requires you to have proper living conditions. As I'm aging and I get older—hopefully I'm keeping it up 'til I'm 80 in diapers and then I'll just have ladies feed me grapes and hope I'll have sold 20 million copies.