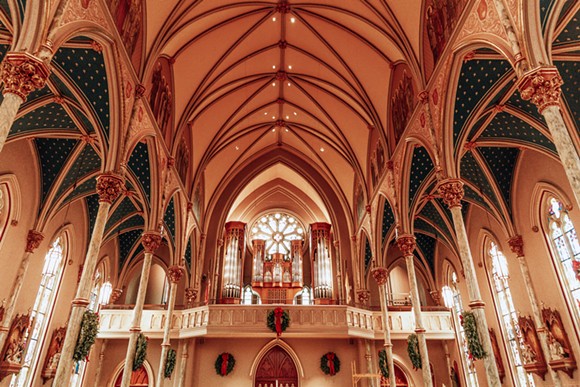 Adriana Iris Boatwright
The interior of Savannah's Cathedral Basilica of St. John the Baptist, decorated for Christmas.
The towering spires and ornate interior of Savannah’s Cathedral Basilica of St. John the Baptist make this an impressive neo-Gothic city landmark year-round, but every December the site is further embellished with Christmas decorations like scores of poinsettias, oversized wreaths, and a grand-scale miniature model of several Biblical scenes surrounding the birth of Christ. This December, the Cathedral Basilica unveiled another embellishment effort that is set to continue until around next Christmastime – the complete refurbishment of a long-neglected lower-level chapel, transforming it from an austere multipurpose room into a graceful hall with vaulted ceilings and stained-glass windows to host varied functions amid an ambience that complements the distinguished setting upstairs.
click to enlarge 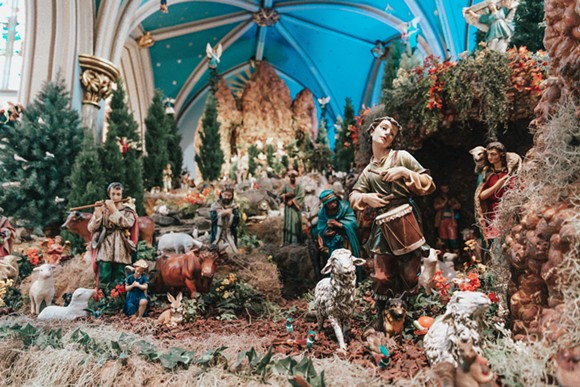 Adriana Iris Boatwright
The model of Biblical scenes within Savannah's Cathedral Basilica of St. John the Baptist, as seen decorated for Christmas.
The new meeting space will be called Regina Coeli (Queen of Heaven) Hall, which is the title inscribed above the ground-level chapel’s decorative entrance on Harris Street. With the hall’s interior now demolished, the refurbishment is expected to last one year and cost approximately $4,750,000, according to Cathedral Basilica Rector Rev. J. Gerard Schreck. “We need a place where people can gather, and we don’t really have a space,” Schreck said of the Catholic congregation’s reasoning behind launching the chapel-refurbishment project. “We really have no place for a reception or anything like that.” The Regina Coeli Hall was last renovated in the late 1930s under the leadership of Monsignor T. James McNamara to provide the parish with a place to hold meetings and bazaars, Schreck said. However, as the onset of World War II limited resources available to the congregation, the chapel-refurbishment efforts were kept modest with features like drop ceilings and plain walls. “He wanted to convert the downstairs to a chapel, which he did, but the war intervened,” Schreck said of McNamara. As a youth growing up in Savannah, Schreck recalls attending varied church functions in the unostentatious Regina Coeli Hall, which was often used for services during summer months to escape the heat that filled the Cathedral before air conditioning was installed. “Masses were held downstairs from just after Easter to October.”
click to enlarge 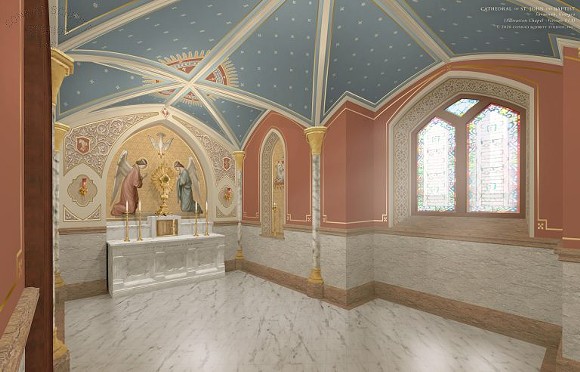 Courtesy of the Cathedral Basilica of St. John the Baptist
A graphic of the plans for the renovated Regina Coeli Hall at Savannah's Cathedral Basilica of St. John the Baptist.
A major restoration project was completed in November of 2000 to revive the main Cathedral interior, but the Regina Coeli Hall was left untouched by this effort, Schreck said. While the ground-level chapel’s renovation had been under consideration for a long time now, the decision to move ahead was partly prompted by the decree of Pope Francis earlier this year bestowing the Minor Basilica title on Savannah’s Cathedral. “It’s a place of historical importance, and it’s a place of pilgrimage for Catholics around the world,” Schreck said of the Cathedral Basilica, adding that before the pandemic struck, the Savannah landmark was welcoming up to 300,000 visitors annually, and is often used for weddings and other special occasions. The refurbished Regina Coeli Hall will have capacity for 600 people, and be equipped with screens to livestream simulcasts of major Cathedral Basilica events to overflow crowds. Additionally, the hall will feature preparation space for weddings, a meeting room, a catering kitchen, new restrooms, a vesting area for visiting priests, and an enhanced adoration chapel. Additionally, the lower-level hall is accessible with the church elevator, and natural light will flow inside through the courtyard.
click to enlarge 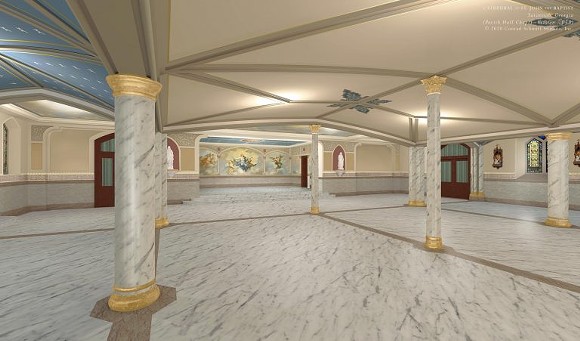 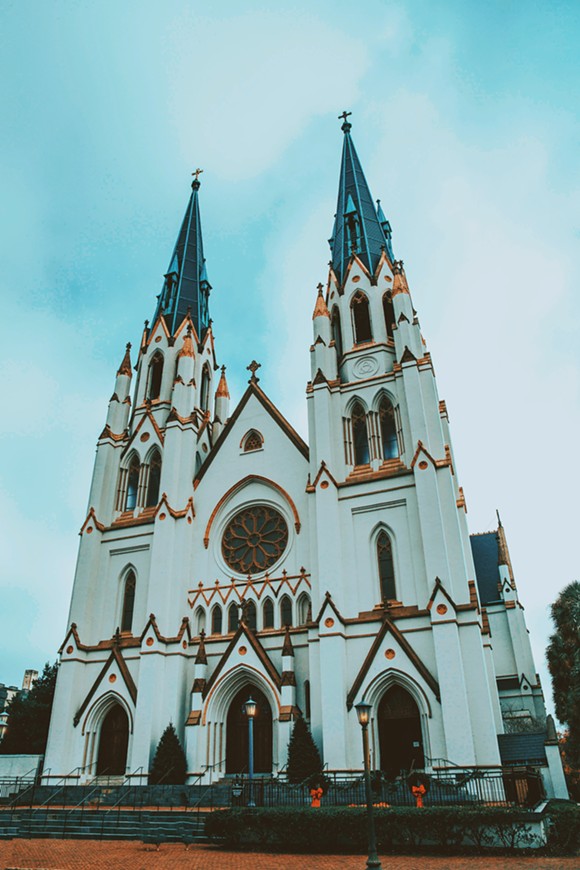 Adriana Iris Boatwright
The exterior of Savannah's Cathedral Basilica of St. John the Baptist, decorated for Christmas.
With such historic travails in mind to provide a long-term perspective, Schreck and other Cathedral Basilica leaders are looking forward to the resumption of large-scale gatherings after the pandemic subsides, when the nave will again be able to hold 1,000 people and the Regina Coeli Hall can soon welcome more than half that number. For now, a maximum of 250 people are allowed inside at once, restricting the Cathedral’s Christmas Mass events this year. “We’ve roped off every other pew to provide the distancing that we need,” Schreck said. “There is a maximum number of people that can attend the services.” To accommodate as many parishioners as possible for Yuletide ceremonies, this year the Cathedral Basilica will hold an additional Christmas Mass on Dec. 24, according to Schreck. The Christmas Eve services will be held at 5:30 p.m., 7:30 p.m., and 10 p.m., while Christmas Day Mass will be held at 8 a.m., 10 a.m., and 11:30 a.m. – and all of these services will be livestreamed as well. “We livestream Mass each weekend,” Schreck said, adding that many parishioners have become quite comfortable with joining Cathedral Basilica services online throughout the pandemic. “People have rightly gotten used to being home.” Nonetheless, Schreck believes that once COVID-19 is no longer a widespread threat and in-person services can resume, parishioners and visitors will gladly flock to the Cathedral Basilica to experience the landmark’s awe-inspiring setting once again. “What we realized is how important it is for people to be present,” Schreck said of gatherings within the Cathedral Basilica – and soon after the holy site is expected to again be filled to capacity, the extra space in the Regina Coeli Hall will welcome even more people within a setting that matches the grandeur of the upstairs sanctuary. “This space needs to be a beautiful space,” Schreck said of the Regina Coeli Hall. “The upper church is magnificent, and it needs to be an appropriate complement to that.” Visit savannahcathedral.org for more details on Savannah’s Cathedral Basilica and the Regina Coeli Hall restoration project. Savannah to honor Kwanzaa with many pandemic-safe events

Speaking of Savannah , Cathedral Basilica Of St. John The Baptist