The bulk of the new allowed area essentially now includes a ribbon where open containers are now legal on each side of Bull Street all the way down to Victory Drive, with a small expansion to include a portion of Starland.

It also includes — a bit more controversially — most of Forsyth Park.

Bob Rosenwald — speaking as himself but who is also a member of the Downtown Neighborhood Association — spoke against the inclusion of Forsyth Park.

"Forsyth Park is a special place, a family oriented place... it's only a matter of time before we're asked to include all of Forsyth Park north to Jones Street," he said. "I'd also point out there's a kid's playground immediately adjacent to Collins Quarter Forsyth Cafe."

Bridget Lidy, the City's Director of Planning, Zoning, and Urban Design, said one of the advantages of the pilot program is its division into three zones — thus allowing the City to terminate the program in one zone if it becomes problematic, without having to cancel the entire pilot or affect other zones. 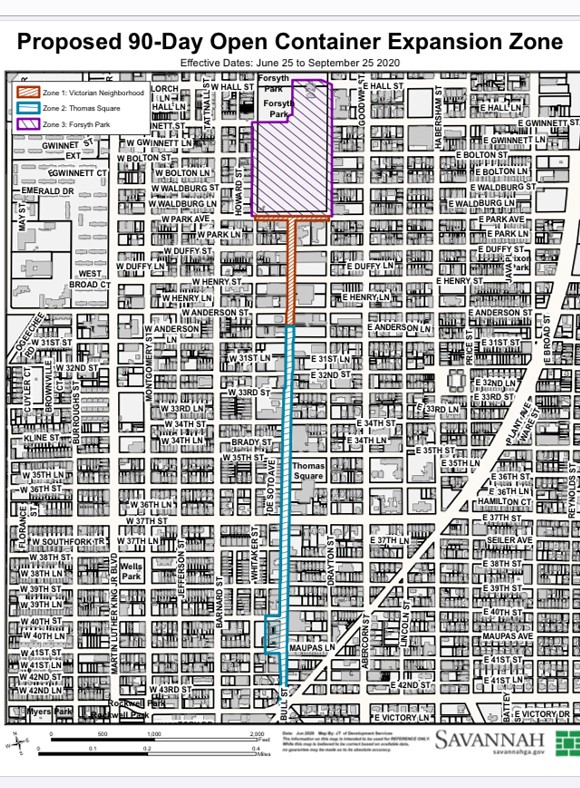 Specifically, the zones are:

The pilot program originated with the Victorian Neighborhood Association, in an attempt to boost businesses along the burgeoning Bull Street corridor.

Mayor Van Johnson and Alderwoman Bernetta Lanier echoed concerns about allowing open containers in the park, outside of the occasional special event permit event, such as Picnic in the Park.

"To allow drinking in Forsyth Park creates a special situation that I don't think will be tenable for the remainder of our parks," Johnson said

Alderman Nick Palumbo pointed out what he called a "to-go cup speed trap" which will exist in the area from Jones Street down to Forsyth Park, where to-go cups will be illegal between the allowed zones.

Currently, the to-go cup ordinance applies to most areas of the Historic District from Jones Street north to River Street, bounded on the west by MLK Jr Boulevard and roughly East Broad on the east.

It takes effect immediately and is set to expire Sept. 25 unless Council opts to conclude it sooner.

The Jinx set to close in July

Mayor Johnson: Masks to be mandatory in Savannah