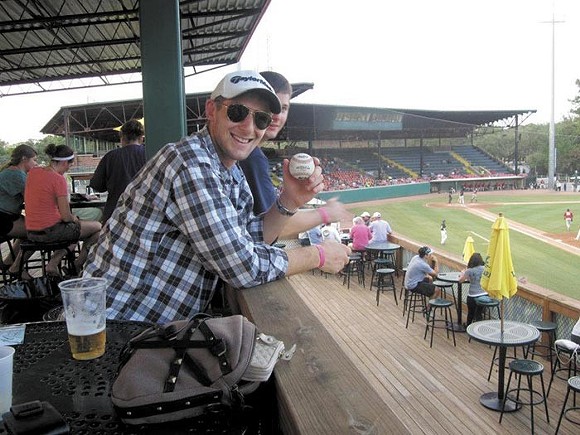 The late Matt Kohler enjoying a Sand Gnats game, one of his favorite pastimes.

A fun and education fundraiser for an important local organization, the Sixth Annual Matt’s Moon River Cruise will be held on Saturday, May 12 at Historic Grayson Stadium.

The event, benefiting the Savannah Bicycle Campaign, is named in memory of Matt Kohler.

Matt's mother Debbie has become an outspoken advocate for increased bicycle safety measures in the wake of her son's tragic death.

"The most common response is 'I'm sorry for your loss,' which is truly expected," she says.

"Yet others come to me and express true gratitude that I will tell Matthew's story in hopes of getting the word out that bicyclists have a right to ride on the right side of the road, and that a car must yield to the bicyclist and give him or her three feet in order to ensure safety for all involved."

A casual bike ride will leave the stadium at 4 p.m. and return for a party featuring live music by Tall Tall Trees, a favorite Savannah Stopover alum.

A "mini beer festival" coordinated by Moon River Brewing Company will happen, along with a silent auction and games organized by Savannah Sport and Social Incorporated.

"The goal is to educate the public on how to safely share the road with people who bike and promote efforts to make our streets safer for all road users," says a spokesperson for the Savannah Bicycle Campaign, whose education programs are benefited by the proceeds.

Helmets are required for the ride.